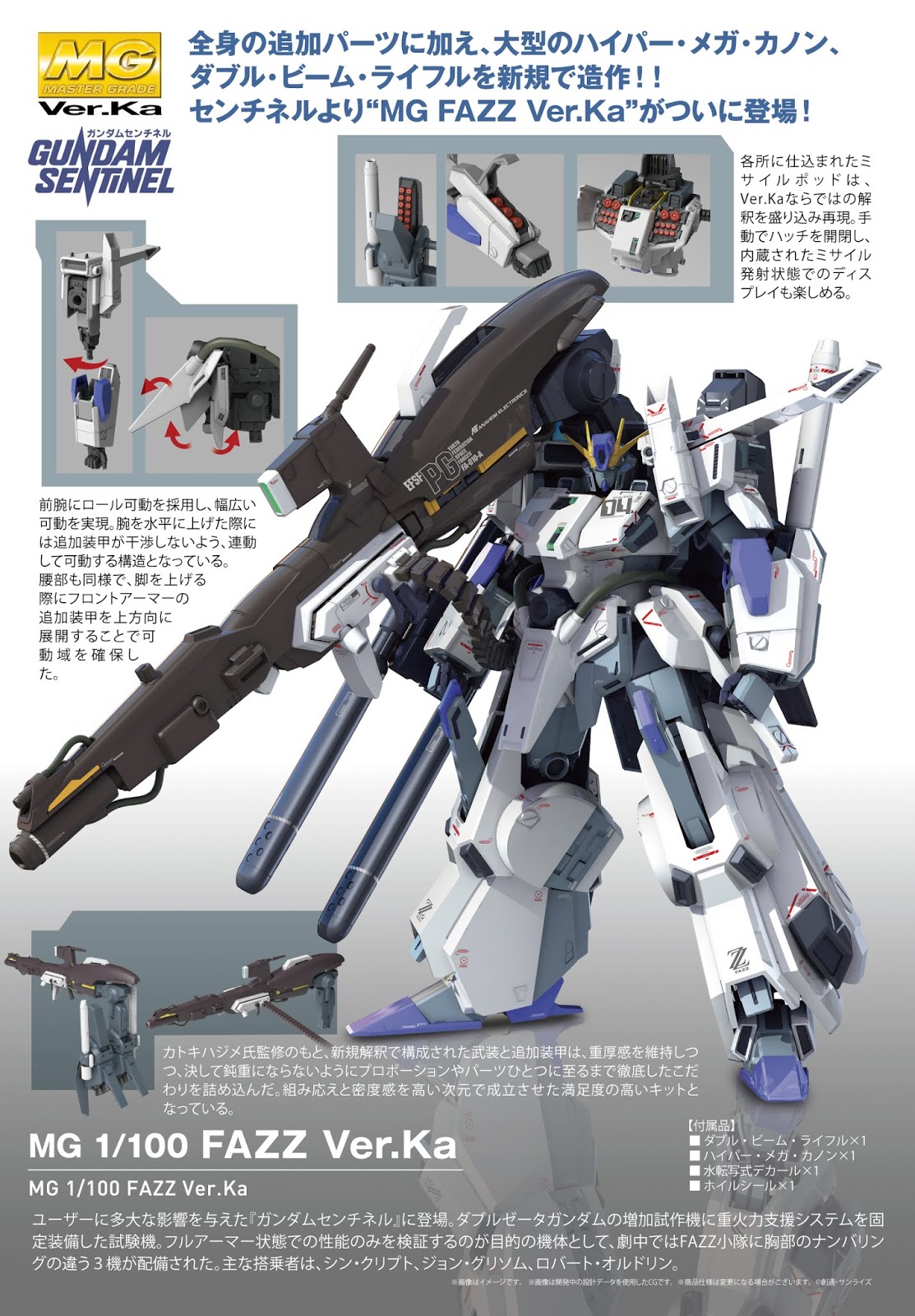 The next Ver. Ka MG model comes from the highly popular Gundam Sentinel photo novel. Created only as a trial production unit to verify the equipment that would be used on the Full Armor ZZ Gundam, its imposing presence masks its low combat ability. Under the supervision of Hajime Katoki, the FAZZ features new proportional armament and armor interpretations as well as various sliding gimmicks. The forearm has been designed with a unique movable roll to achieve a wide range of movement. When the arm is raised horizontally, it is structured to move in conjunction so that the additional armor does not interfere. When raising the legs, additional armor of the front armor is deployed upwards to avoid the parts rubbing. Missile pods loaded in various places are reproduced with Katoki's new unique interpretation found only on the Ver. Ka. You can also open and close the hatch manually and enjoy the built-in missile display. Includes Ver.Ka water decals that include different chest numbering. Includes Double beam rifle X 1, Hyper Mega Canon × 1
Customer Reviews
4.9 Based on 55 Reviews
5 ★
87%
48
4 ★
13%
7
3 ★
0%
0
2 ★
0%
0
1 ★
0%
0
Customer Photos
i
i
i
i
i
i
i
i
i
i
i
i
Write a Review Ask a Question

Excellent experience. Box was in excellent condition with everything included, and came in a timely fashion.

United States
A big mech with a big gun

Pros - Some really well thought-out engineering when it comes to the MS itself. - Water slide decals are extremely nice once they've set. Typical ver. ka perfection. - Weaponry is aesthetically great, with very few visible nub marks. The missiles are seriously nice, and the double beam-rifle looks great. - The rear foot "spurs" do a terrific job keeping the model stable despite the heavy weaponry. Cons - A seriously insane amount of left-over plastic after completion. Could be a plus if you're into kit-bashing, but otherwise feels like a waste of $. - The hyper mega cannon turns this figure into a brick! - It's super difficult to grasp if the double beam rifle is equipped (but not impossible, despite what the instructions imply). - If both weapons are equipped on the right side, it can cause the figure to seriously lean over on the waist. If you're not a purist, you can swap out the mounting piece for the double beam rifle to the left arm to better balance the figure. - The cannon points in two directions: slightly downward or level. And even level is tricky to achieve. I tried desperately to point it above-level by about 30 degrees, but the backpack and ammo belt were not going to let that happen. Overall it was 95% great build, 5% intense frustration with how limited the hyper mega cannon poses. I can understand why some people might opt for the second missile bay on the back instead. I guess a gigantic weapon like that causing balance issues shouldn't come as a surprise, and throwing a second seriously big gun into the mix (on the same side no less) makes it inevitable, but I was hoping the engineering would have better accounted for it. Still a killer kit and would probably buy again.

This was a fantastic ver ka to build, and I could not believe how big the gun is! It is much more taller than the suit itself. The grey suit with the white armor looks fantastic as well. Must buy in my opinion. It becomes a bit hard to pose when the gun is put on and trying to hold it all can be a struggle, but otherwise fantastic all around.

Lots of parts and the usual Katoki goodness.

It’s the fazz what more can I say. It’s a big kit