New transformable mobile suit from Gundam Unicorn based on the Zeta Project. The Delta Plus with its gray military color scheme is an excellent build for any fan of transformable model kits. Comes with beam rifle, beam sabers, shield, and action base connectors. 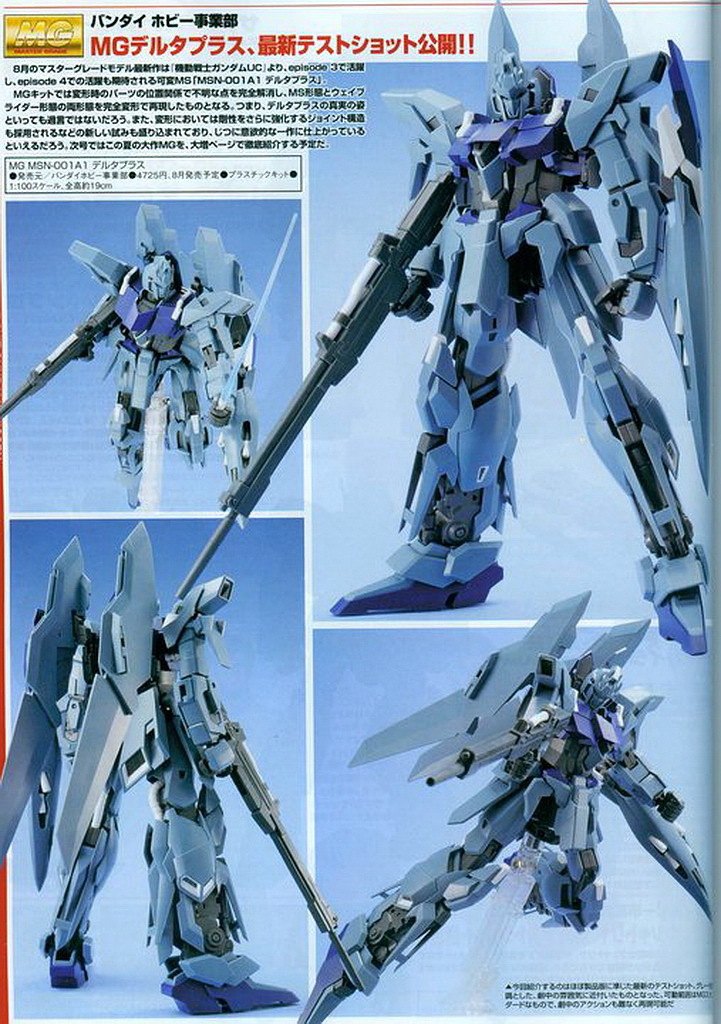 As a first time Gundam buyer I had zero idea what to do, but with the very simple website design and accurate photos of the kits, buying without handling a box myself couldn’t have been easier. Will be purchasing from this website again.

Honestly, I have built alot of UC kits, and for a fodder unit, this is up there in ratings for me next to the Jesta. I love all the kits I have purchased from Unicorn... however transforming is tough ;( Some times the instructions really don't do you justice to actually show you what you should do truly... or.... tell you how much pressure you will feel where you still wont break the plastic. The Delta Plus is one of the better kits I will say I have bought from UC. The transformation reminds me a bit of the Wing transformations, so I felt I figured it out okay.

United States
A Kit for An Ace

Very satisfying! Build wise, it was easy for me to put together and rigid on holding its limbs up and with its legs as well. Honestly thought it was metallic and how solid it felt. Waverider was no different once you build it exactly as it should be. Transformation feels as if it needs to be more detailed in instructions or perhaps simplified. It took various reviews and a good deal of patience and hours of breaks and retrying to get the transformation correct. It also requires an additional set of pieces to make the waverider mode much more stable. The gun can not seem to hold onto its hand well, but more manageable in waverider. While not many pictures often show it can be put on anything else but its sides/wings, it CAN be put above. (Thank you Gravity for lending a hand in this....) Now for pose ability, it is possible to do posing on this even without a stand due how it is, but there will be parts that are limited. The eyes surprised me being that it was an MG kit. It was similar to the HG kits using stickers, but it also had the option to not use it, based on reviews of others, it's supposedly for using an LED unit. I say this as the green in the back of its head is also a sticker and is transparent as well when you build it. I had tried to see if this had a landing gear, but could not find it. tl;dr version: PROS: -Solid kit in both MS and Wave Rider -Parts are rigid making poses easier to maintain. -The Color was far better than I expected (Personal Choice) -Pleasing to look at and knowing it wont fall on its face. -It Can Transform -It's eyes are made of a clear plastic. -Interesting details and smaller parts that can move. -Can use the beam saber effect/appearance on the gun to make it appear as if firing. CONS: -Putting this in Waverider will make you want to flip table after table. -The gun feels very loose despite having the peg to hold it in place. -Transforming this feels far more complicated than with ReZel C-Type GR Version -Waverider Instructions feels not as helpful; it will take watching multiple videos and reviewing instructions to take a look at the final intended product and procedures. -Limited Poseability -The eyes behind the clear glass would have to be a sticker. -It has no landing gear..... (Levitation must be a thing?) Verdict: This kit was great to build, but transforming it will be the true challenge. It is great to look at in both in MS and Waverider mode. I highly recommend for those that do wish to get a transformation kit. It's similar to the Zeta and ReZel in terms of transformation, but it lacks the landing gear Zeta has. It does however have more poseability than the ReZel GR.

one of the highlights of the anime is when this suit gets introduced. had to get it.

Has a couple of hang ups but it’s a real looker. If stylish transforming kits is your thing this is the kit for you.